“Fascinating reading on changing trends in how and where we live.” — Booklist

In The End of the Suburbs: Where the American Dream is Moving, Leigh Gallagher documents one of the most profound social changes to hit our country in a generation: a growing distaste for, and movement away from, the American suburbs, one of the most revered institutions in our collective culture. This shift is as provocative and monumental as it is irrefutable, as Gallagher documents by marshaling ample evidence and data. Weaving that evidence together with rich history, her own personal narrative growing up in the suburbs of Philadelphia, on the ground reporting and lively anecdotes from a cast of colorful characters, Gallagher takes her readers on a journey through one of the most significant and far-reaching social trends to hit our culture in decades—and shows us how the future of our housing landscape is not bleak, but better.

Here’s the full summary as it appears on the book jacket:

After the U.S. housing bubble burst, no part of our country felt the pain more than the suburbs. Headlines screamed of foreclosed homes, displaced families, and an upsurge of crime in the once bucolic subdivisions that for so long symbolized the American Dream. Even five years later, conventional wisdom seems to be that this is all temporary—that once the economy rights itself and home prices return to pre-recession levels, we’ll go back to the lives we led before.

But that’s not true.

According to Leigh Gallagher, the recession was simply a catalyst for a much larger trend. The suburbs may have represented the dominant pattern of housing and population growth in the United States for more than half a century, but powerful social, economic, and demographic forces—along with the suburbs’ poor design to begin with—are converging to render them unnecessary, and even undesirable, for an ever-increasing number of Americans.

Consider some of the forces at work:

The nuclear family is no longer the norm: U.S. marriage and birth rates are steadily declining, while the number of single-person households is skyrocket­ing. The main selling points of suburban life—good schools and family-friendly lifestyles—matter less.

We want out of our cars: As the price of oil con­tinues to rise and commuting becomes more expensive, once-affordable homes on the suburban fringe are no longer a bargain—and we are driving less, in general, for the first time since the invention of the automobile. This is especially true among teenagers, who are delaying getting their driver’s licenses, and young adults, who are opting to live in more walkable, action-packed communities.

Cities are booming: Once abandoned by the wealthy, cities are experiencing a renaissance, especially among younger generations and even among families with young children. At the same time, suburbs across the country have had to confront never-before-seen rates of poverty and crime.

Not all suburbs are going to vanish, of course, but the trends are undeniable. In this deeply reported work, Gallagher introduces us to a lively cast of characters, including the charismatic leader of the anti-sprawl movement, a mild-mannered Minnesotan who quit his job to convince the world that the suburbs are a financial Ponzi scheme, and a grade-school teacher whose commute entailed leaving home at four a.m. and sleeping under her desk in her classroom. Blending powerful data with on-the-ground reporting, Galla­gher takes us inside the hundreds of new communities springing up around the country—such as shopping malls that are being converted into downtown-like neighborhoods and walkable urban suburbs that are more reminiscent of small towns than sprawling modern-day subdivisions.

Offering a fascinating and timely portrait of our changing landscape, Gallagher reveals irrefutable reversals taking place—and demonstrates why the post–cul-de-sac future is not a bleak one but a better one. The end of the suburbs, as Gallagher foretells it, will mean more options, and stronger, happier, and healthier communi­ties, for everyone. 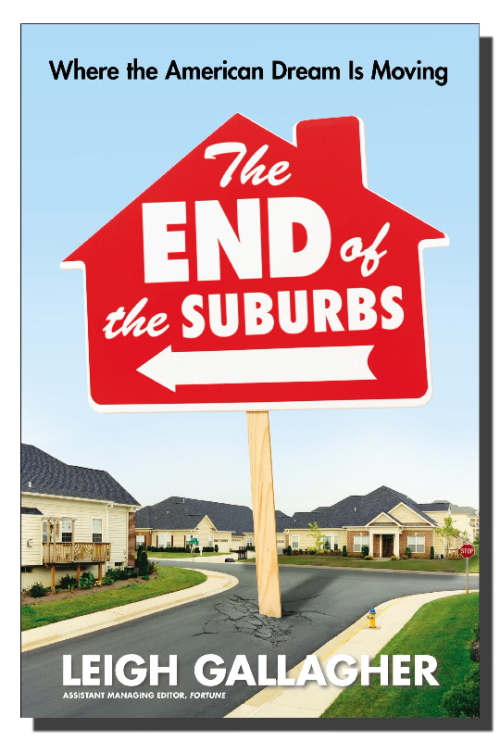 What People Are Saying

“This book is a steel fist in a velvet glove . . . The End of the Suburbs is the most convincing book yet on the lifestyle changes coming to our immediate future.”
— Andres Duany, founding partner of Duany Plater-Zyberk & Company and co-author of Suburban Nation

“By the time you finish her book, you’ll find yourself speeding through America’s zombie settlements and breathing a sigh of relief when you cross into a bona fide urban area.”
—New York magazine

“An entertaining journey through the demise of U.S. suburban sprawl and the surprising renewal of its urban centres”
—the Financial Times

“A fascinating look at one of the most important trends in our country.”
— Ed Rendell, former Governor of Pennsylvania

“A fantastic read…the stories are graceful and compelling.”
—Charles Duhigg, author, The Power of Habit

“Crisp, entertaining and fact-filled.”
—Bethany McLean, coauthor, The Smartest Guys in the Room and All the Devils are Here